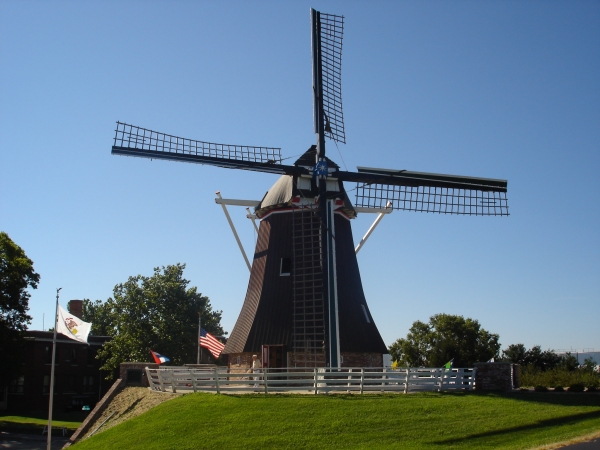 Fulton's Dutch Windmill was manufactured and pre-assembled in the Netherlands.

Following the delivery to Fulton, the Windmill was assembled and installed by Dutch craftsmen. Standing nearly 100 ft. tall, the massive timbers are assembled by wooden pegs. Dedication of the new Dutch Windmill took place during the Dutch Days Festival 2000.

The windmill is fully operational. The entire head (or cap) can turn and the sails move by wind power. The mill is also fully functional with a set of blue basalt millstones that can produce a variety of flours. Stone-ground buckwheat, corn, rye, and wheat flours are all manufactured at "De Immigrant" and are for sale in the gift shop at the Windmill Cultural Center. The stones take up three floors with various machineries, and millers can grind approximately 1 bushel of grain every 10 minutes, wind permitting.

Entrance to the windmill is free, but donations are appreciated for maintenance and operations.

Due to COVID-19, de Immigrant is closed until further notice.